This episode is probably the main highlight of Moses’ biblical adventure. Summary: tormented by Pharaoh who refused to free the Hebrew slaves, God plagued Egypt with a series of devastating scourges. Plot twist: Moses wins and splits the sea. Recent update: what if there was science-backed evidence that the Ten Plagues of Egypt actually occurred?

The Book of Exodus, second part of the Old Testament, tells the story of Moses tasked by God to lead the Hebrews to safety and the Promised Land. However, most of the ‘children of Israel’, having fled their country out of hunger, had been reduced to slavery by Pharaoh, the supreme leader of Egypt. Moses thus requested a hearing at the latter’s palace in order to tackle the matter. Despite Moses’ appealing arguments (“otherwise, I’ll tell God about it”), Pharaoh refused obstinately to free the slaves, hence becoming the target of divine wrath.

In order to bend the Pharaoh to his will, God cursed the land of Egypt with ten successive plagues. The Nile waters turned into blood; frogs, lice and mosquitoes invaded the country; the cattle succumbed; boils appeared on people and animals; a thunderstorm of hail and fire broke out; clouds of locusts destroyed crops; darkness was summoned for three days; and – worst of all – all the firstborns died throughout Egypt. Following this ultimate punishment, Pharaoh gave in and let the Hebrew slaves go free. Moses then led the happy party to the Promised Land, although barely escaping – Pharaoh having reconsidered his decision – the Egyptian armies on his heels thanks to valuable sea-splitting skills. (This is harder a trick than one might think.)

Obviously, this biblical odyssey never claimed to have any historical basis. Until some archeologists linked it to an ancient – and apparently unrelated – disaster: the volcanic eruption of Thera (now Santorini) which occurred roughly 3,500 years ago. About 1600 B.C., a gigantic blast shook the Cyclades archipelago, and the current shape of Santorini – a smashed semicircle – still carries the memory of its tremendous violence to this day. According to experts, the volcanic eruption caused a 25-mile high column of smoke that blocked out the sun. Tsunamis wreaked havoc on military fleet and coastal habitations, Tons of ash and lava submerged what remained of the Minoan civilization, which never recovered from the event.

The scope of the catastrophe was such that geologists noticed traces of the eruption in Greenland and California. Egypt inherited from layers of ashes deposited at the bottom of the Nile River – a thousand kilometers away from the blast. 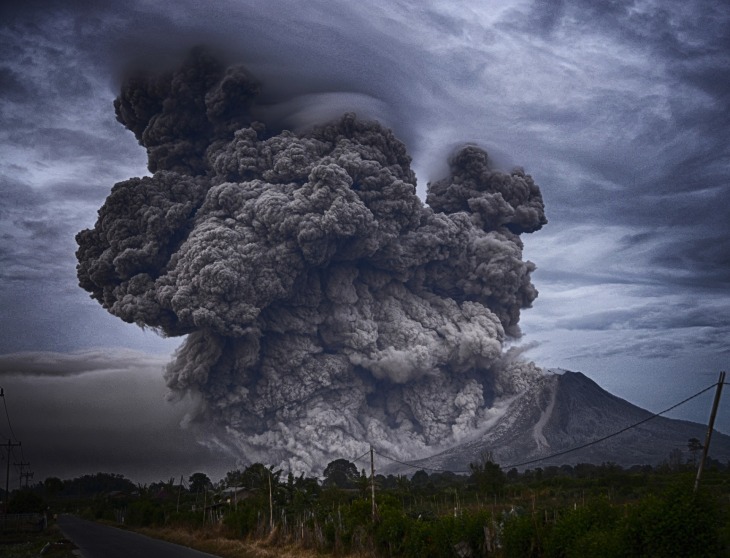 From there, archeologists found the first hint of an actual, not only biblical, curse. “The waters […] shall be turned to blood. And the fish that is in the river shall die, and the river shall stink; and the Egyptians shall lothe to drink of the water of the river” (Exodus, 7:17). The first plague stroke the fertile Nile delta, making its waters non-drinkable; biologists suggested that volcanic ashes may have contributed to this bright red color, rich in sulfur. This dangerous chemical cocktail undoubtedly turned the Nile waters extremely sour and inhospitable: hundreds of poisoned fish washed ashore and frogs massively fled. “The river shall bring forth frogs abundantly, which shall go up and come into thine house, and into thy bedchamber, and upon thy bed, and into the house of thy servants, and upon thy people” (8:3).

Without a steady water supply, frogs dehydrated and died around the place – a mouthwatering banquet for lice and mosquitoes, which invaded Egypt according to God’s third and fourth wishes. After all, frogs were not there anymore to regulate the insect population. Did those tiny yet abundant bugs propagate deadly epidemics? “All the cattle of Egypt died,” (9:6) probably because of viruses but also food shortages and ash inhalation. The poisonous Nile waters had contaminated the herds, as well as humans living nearby: hence, the boils featured in the sixth plague. Another plausible explanation for such skin lesions may be smallpox, common in Ancient Egypt – smallpox pustules were even discovered on the mummy of Ramesses V.

So far, a simple chain reaction, originating from a single natural disaster, may have produced the first six plagues attributed to God’s wrath. What about the others?

“There was hail, and fire mingled with the hail, very grievous, such as there was none like it in all the land of Egypt since it became a nation” (9:24). Ancient texts could mistake volcanic fallout for hail; and it is widely known that a natural disaster often causes climate disruptions likely to affect the weather forecasts. As soon as hailed stopped, locusts followed suit. “They shall cover the face of the earth, that one cannot be able to see the earth,” (10:5) God warned. Nothing unusual here: swarms of locusts often proliferate at springtime in Egypt, and high humidity levels – such as those caused by hailstorms – favor their multiplication. Was such an invasion responsible for “thick darkness in all the land of Egypt for three days” (10:22)?

Even millions of grasshoppers could not obstruct the sun for 72 hours, unless the biblical tale voluntarily exaggerated the fact; however, the monstrous black cloud of ash could well do. A similar cataclysm (rated 7 on the Volcanic Explosivity Index, as Thera’s) struck Indonesia in 1815, with apocalyptic consequences: the Tambora volcano erupted and caused a ‘volcanic winter’ – a massive drop in temperatures due to a lack of sunlight – which culminated in ‘The Year Without A Summer’, as 1816 sadly got nicknamed.

Remains the last curse – the most cruel and ruthless, which eventually made Pharaoh yield: “the firstborn in the land of Egypt shall die, from the firstborn of Pharaoh that sitteth upon his throne, even unto the firstborn of the maidservant that is behind the mill” (11:5). As archeologists pointed out, such a massive extinction would have produced visible signs such as mass graves or giant ossuaries. Considering Egyptian demography at the time, the death of every firstborn in the country would indeed have wiped hundreds of thousands people away. A more feasible explanation lies within Ancient Egyptian customs: at mealtime, the eldest eats first. Would the cereals have been poisoned by the former scourges (insects, humidity, sunlight deficit), the firstborn would have been first to bear the tragic consequences.

The Ten Plagues of Egypt may have been merely the reflection of an unhappy era triggered by an initial disaster. Most of the problems plaguing the country are linked with a cause-and-effect relationship, although they probably did not happen successively but at the same time. As always when it comes to ancient stories, it has surely been exaggerated and magnified over the course of time, turning a tragic catastrophe into a divine punishment. Only later should humankind realize that not only God was capable of such violence and misery.