During WW2, British secret services have given the green light to some crazy wartime initiatives. Amongst the most surprising ones, the construction of an aircraft carrier made of ice, so as to outbalance Nazi supremacy in the Battle of the Atlantic.

One easily forgets that several of WW2’s most decisive battles were not fought on solid ground. As soon as 1939, the Atlantic was considered a strategic objective–the exchequer which would, ultimately, determine the outcome of the war. Following a successful blockade established in the early months of the conflict, preventing Nazi Germany from getting proper food or military supplies, Allied Navy suffered heavy blows. France surrendered in May 1940, scuttling part of its ‘royal’ fleet before it fell into the hands of the enemy. British retreat from Dunkirk illustrated that shift in power, and the following years, the Kriegsmarine could patrol unrestrained across the waters of Western Europe.

From then on, the Atlantic featured a series of bloody confrontations, each more terrible than the other. German redoubtable U-Boote ovewhelmed Allied convoys, and soon enough, the British Isles, which relied heavily on imports, were cut off from the rest of the world. The Battle of the Atlantic only grew stronger, with destroyers, submarines and fighter jets joining in; it featured no less than 1,000 confrontations between 1939 and 1945. From Venezuela to the Caribbean, from the shores of Britanny to West Africa, the whole ocean turned into an underwater graveyard.

All the while, Winston Churchill was patiently studying his chances to take advantage of the situation. “The only thing that ever really frightened me during the war was the U-boat peril” the Bristish PM wrote in his Memoirs. Despite American better-late-than-never involvement in WW2, the U.S. Navy was busy enough on the Pacific theater, and the rest of the Allies remained on their own for the time being. Churchill, as usual welcoming his staff’s odd initiatives, would soon learn about the one codenamed Project Habbakuk.

An iceberg in the lab

Originally, Habbakuk is the name of a Biblical prophet. “Look at the nations and watch, and be utterly amazed,” he said on behalf of God (Habbakuk 1:5). “For I am going to do something in your days that you would not believe, even if you were told.” Hence the funny codename — the related military project was indeed quite surprising: a colossal aircraft carrier, about 2,000 feet (610 meters) long and 330 feet (100 meters) wide…

Imagined by Geoffrey Pyke, a science journalist working in close relationship with British secret services, the gigantic boat was bound to outclass all the aircraft carriers the world knew. But it wasn’t just its most innovative feature. The ship would be made of 86% of ice and 14% of wood pulp, turning it into an iceberg stacked with guns. The staff of Lord Mountbatten (Chief of Combined Operations) seriously started working on Habbakuk by the Fall of 1942.

Why ice in the first place? Easy: it’s strong and can quickly (and cheaply) be replaced. Combining it with wood pulp reduces heat conduction, preventing the giant from melting. What’s more, the size of the aircraft carrier greatly extends its welcoming capacity; it could theoretically be home to 150 planes. However, its most visible weakness may be its weight, causing it to be incredibly slow, barely reaching the speed of ten knots (about 11 mph).

Lord Mountbatten was tasked with convincing Churchill. The former knew the PM’s taste for the unexpected and the spectacular, and according to legend, he entered Churchill’s private bathroom and dropped a chunk of ice into the steaming water. May it be true or not, Churchill gave his green light to the project: “the advantages of a floating island or islands, even if only used as refueling depots for aircraft, are so dazzling that they do not need at the moment to be discussed” he wrote in December 1942. The game was on. 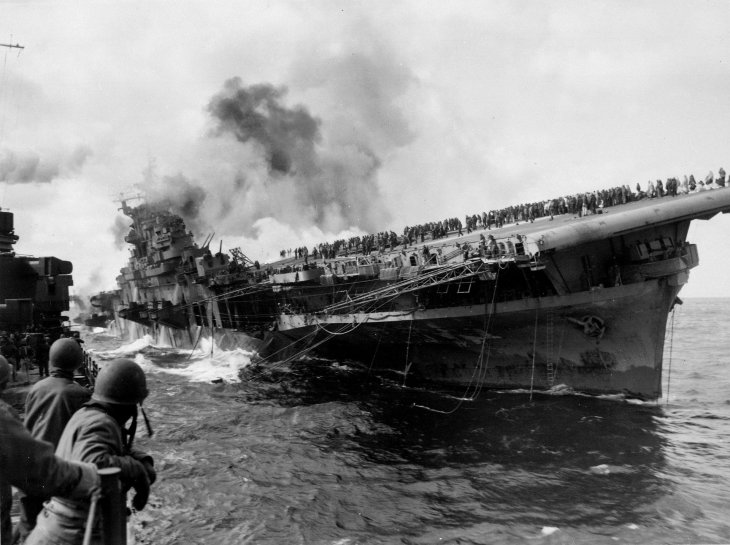 A team of scientists was immediately dispatched around Patricia Lake, Canada, to resume investigation and testing. In the early lights of 1943, a 1,700 square-feet prototype emerged, and it was shot at (for research purposes, of course). Both Canadian and British researchers ignored the actual, military nature of the project; they simply renamed it ‘Noah’s Ark’, an odd reverberation of Habbakuk’s Biblical genesis.

The project, however, took a heavy blow at the Québec Conference, in August 1943; more urging matters were at stake — the preparations of D-Day, for one thing. At an approximate cost of 70 million dollars and 8,000 workers needed, Habbakuk encountered financial as well as operational obstacles. When it comes to building a 15-storey rudder, British admiralty had to realize the frontier between imagination and wartime reality was far greater than expected.

But, as ironical as it sounds, it was ultimately the Allies’ technical superiority that pushed floating islands into the bakground. The upgrading of radar technology greatly expanded the range of fighter jets, and mid-Atlantic bases turned unnecessary. Allied powers also negotiated new locations for their planes: Iceland and the Azores. Lord Mountbatten, who had moved heaven and earth for Habbakuk to materialize, was sent to Asia in November 1943. Despite Churchill’s motivation, the military iceberg was never deployed. “Success is stumbling from failure to failure with no loss of enthusiasm,” the British PM famously wrote. He certainly did not lose his.